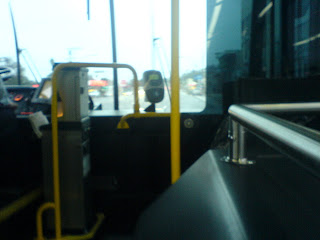 No fanfare, no web site announcement, no whatever, SamTrans quietly accepts Clipper card for payment by uncovering the Clipper readers, which has been installed on buses for several months.
For now, only e-cash (without discount) and monthly passes are available on Clipper for SamTrans. Occasional SamTrans riders will still need to buy bus tokens from retailers like Safeway in order to receive a 20% discount. Ironically, Muni offers a 10-ride "ticket book" on Clipper, which costs $20 and provides no discounts from cash. AC Transit also had 10-ride paper tickets which provided no discounts. These tickets were eliminated when the agency fully transitioned all passes to Clipper.
For Clipper, SamTrans instituted a policy on line KX that require SF-bound riders who use Clipper to tag the card when boarding and again exiting in SF. Because line KX is a mixed local and express service, riders only pay the express fares if they ride north of SFO. The second tag in SF is basically to charge the card from local (when they board south of SFO) to express fare. It is possible for someone to evade the express fare northbound by exiting quickly (or through the back door) and not tagging the second time. It would be interesting to find out how will that policy be actually executed on the buses.
On Golden Gate Transit and Caltrain, the highest possible fare is deducted on the first tag, so any passenger who ride for a shorter distance has an incentive to tag the second time to get a refund.
Meanwhile, SamTrans will be introducing new fare boxes in the next few months. The new fare boxes will be able to accept and issue magnetic strip cards. One of the features planned is to provide change on a card for riders who feeds larger bills into the fare box. The rider can use the card to pay for fares in the future or possibly redeem the card for cash at the transit office.
Another feature also planned with the introduction of new fare boxes is day pass. Day pass, already available on VTA, Santa Cruz Metro, MST, and countless other agencies, is a convenient way for occasional riders and visitors to pay and use the system. Day pass also reduces transfer penalties.
While SamTrans staff recognizes the benefits of day pass. They have been hesitant on implementing the pass until they first introduce the new fare boxes, which can issue day passes automatically. What they don't want is to follow VTA's footsteps in making and distributing preprinted day passes.
The day pass is planned to cost $6, exactly the same as VTA. However, the pass is expected to be available for local fares only. Riders will need to pay an upgrade for higher fare routes. Staff is planning to introduce the pass by the end of next year, after they roll out new fare boxes and conduct public meetings and "analysis" for something that will obviously benefits riders.
What will also be helpful is to have the day pass be introduced on Clipper as a form of a fare cap. So if someone who has paid $6 on SamTrans rides in a day, all SamTrans rides will be free for the rest of day. Another thing SamTrans could do is to make all e-cash fares $1.60 for Clipper riders.
Posted by accountablevta at 5:36 PM 1 comment:

On January 10, 2011, VTA will implement a number of bus service changes:
Schedule changes: 13, 14, 17, 18, 19, 22, 23, 25, 27, 32, 34, 35, 42, 46, 48, 49, 51, 57, 60, 61, 62, 66, 68, 71, 81, 88, 103, 120, 330, 522, DASH
11 - Frequency will be adjusted to every 35 minutes. VTA says the actual travel time is longer than previously estimated.
64 - Bus will run on 13th and Julian streets in both directions between Santa Clara Street and McKee Road. The City of San Jose is converting both Julian and St. James Streets from one-way couplets to two-way streets.
180 and 181 - Line 180 will become a weekday only service between Fremont and Milpitas. Line 181 will provide service on weekends with a stop at the Great Mall. There will be no weekend VTA service along Mission Blvd in Fremont. Riders along Mission Blvd can take AC Transit local bus 217 to Great Mall.
VTA says the 181 routing along 880 and Stevenson is faster than the 180 along 680 and Mission. Switching the routes on weekends will help keep buses on time.
63 - Last July VTA added a southbound trip at night due to rider request. However, ridership numbers are not meeting minimum ridership standards (9 riders during SJSU session. Standards call for 15 riders). VTA is planning to cut that trip next July if ridership does not improve.
On January 1, Caltrain will reduce weekday service (4 late morning/early afternoon trains) and raise fares. At the same time Caltrain will add 4 weekend Baby Bullet trains on a trial basis until March. The new weekend trips will cut the travel time between San Jose to San Francisco by more than 30 minutes compared to local service. Trains will also stop at Millbrae, San Mateo, Hillsdale, Redwood City, Palo Alto, Mountain View, and Sunnyvale.
If Caltrain's partners (which includes Muni, SamTrans, and VTA) decide not to further cut funding next year, the weekend express service may continue if weekend ridership grows by 10%. See schedule below: 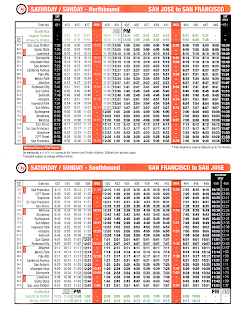 Posted by accountablevta at 7:01 PM 5 comments: