From SV411 blog, and published in San Jose Metro:

"Why did Connecticut developer Republic Holdings Corporation drop $50,000 into the Democratic party’s coffers on September 5?..." (which that committee supports Chavez's bid for mayor)

"Those generous individuals at Republic also contributed $5500 directly to Chavez’s mayoral campaign. A half-dozen nicely synchronized checks showed up at the end of April..."

"Documents show that Cindy Chavez met with a developer a day before the Valley Transit Authority committee she chairs approved its project and seven weeks before the firm donated $50,000 to the Democratic Central Committee’s United Democratic Campaign..."

The Gonzales style pay to play culture has occurred under Cindy Chavez's watch as the chair of VTA. What more could happen if she becomes the mayor of San Jose, which controls five votes on the VTA board?
Posted by accountablevta at 3:43 PM No comments: 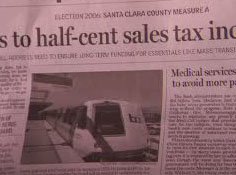 For most candidates with much more issues in the city at stake, the BART extension is a minor issue. They don't want to appear as a slightly weaker candidate by opposing a project sponsored by SVLG that would supposedly bring civic pride to San Jose.

However, many of them have not personally reviewed the budget, details of the project, and plans that would build a more efficient and effective transit system than the BART extension. Only until after the November election will reality set in.

With the loud and clear message from voters against more taxes for more of the same, there is no effective solution to backfill the capital and operating funding shortfall that amounts to billions. Prop 1b, if the voters approve, would only provide a fraction of what VTA needs, with most of the funding going to highways and transit projects elsewhere in the state. Private financing isn't enough to support subway construction when building heights, along with other factors, discourage urban development similar to downtown San Francisco. In addition, SVLG has opposed to any non-sales taxes that would force its member businesses in transit hostile areas to pay for BART, which SVLG claims they need. If SVLG could have its way, its members won't have to pay any sales tax for BART either.

In light of the APTA convention in San Jose this week, VTA Watch would like to grade our local transit like Carl Guardino, John McLemore, Stuart Cohen, and Eugene Bradley that have appeared on Gary Richard's column.

After years of fare increases and service reductions, VTA should review and streamline the bus system to increase speed and convenience, while maintaining essential service to low-income communities. To be a sustainable agency, VTA should focus on making a system that is rider-oriented. VTA can't simply build more poorly planned rail lines that would attract riders far lower than advertised. VTA therefore deserves a C.

Caltrain on the other hand, has invented itself in the last two years with relatively little resources. For most part, Caltrain has been politically neglected. Many politicians, as well as groups like SVLG, believe that more funding should be diverted to building more BART than improving Caltrain. However, despite over a billion dollars have been spent on extending BART from Colma to Millbrae, the BART SFO extension has seen a 0.2% increase in ridership in August from last year, while Caltrain has seen a 13.4% increase.

Caltrain has many challenges. Caltrain can become a more efficient service with a more modern rolling stock. Caltrain needs to be more accessible for passengers in wheelchairs and in bicycles. Caltrain also should not continue to rely on diesel fuel, due to fluctuating fuel prices and pollution. Caltrain therefore deserves a B+.
Posted by accountablevta at 9:51 PM No comments:

Email ThisBlogThis!Share to TwitterShare to FacebookShare to Pinterest
Categories: Caltrain

VTA and the City of San Jose need more cooperation

Unlike the rerouting information provided for the San Jose Grand Prix. These rerouting brochures only contain the reroute descriptions in text, with no maps and graphics, and are photocopied rather than printed.

It was reported that the VTA had no prior knowledge of this event until sometime early last week when one of the VTA staffers visited the Marathon's web site. The VTA staff quickly drafted a rerouting plan and made it available to the public.

Although VTA's quick action has prevented a possible transit meltdown on the morning of October 8, it also highlights that the City of San Jose, which hosts the event, needs to work with VTA to plan around special events and to help market transit to participants. The Rock and Roll Marathon's web site contains no information on VTA, despite the fact that the light rail and some of the bus routes start operating early on Sundays, well before the 7:55am start of the race. The Bay to Breakers, on the other hand, provides extensive information on access by public transit online.
Posted by accountablevta at 1:03 AM No comments: